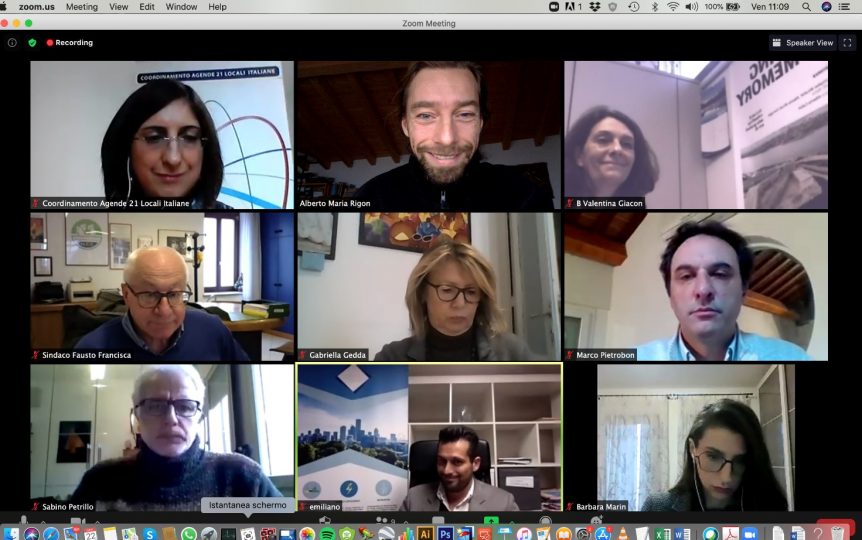 On Friday 22 January the first twinning meeting took place for another partner of LIFE Veneto Adapt: the Unione dei Comuni del Medio Brenta virtually met up with the cities of Borgofranco d’Ivrea (Turin) and Montecchio Maggiore (Vicenza), both selected for the “Call for Twinning”, promoted by LIFE Veneto Adapt.

Those who took part in the event for the Comune di Borgofranco d’Ivrea, included the mayor Fausto Francisca and the Assessor Gabriella Gadda with representatives of the Urbanistica Urbanistica, public and private housing, traffic circulation, street furniture, internationalisation and Balmetti; for the Comune di Montecchio Maggiore, Sabino Petrillo head of Servizio Progetti. Also in attendance were Alberto Maria Rigon for the Comune di Vicenza and Valeria Baruzzi of Coordinamento Agende 21 Locali Italiane.

Just like the other twinning meetings, during the call an assessment was made of the initiatives being created by the Veneto ADAPT partners within the scope of the project. On their behalf the twinned Comuni Borgofranco d’Ivrea and Montecchio Maggiore illustrated how much, on the respective territories, is being done to manage the effects of climate change and to adjust to the changing climate. Contributions that dealt with the hydraulic redevelopment of river stretches, upgrading the civil protection system and sustainable regeneration, redevelopment and renaturation were subjects of particular discussion and exchanges of ideas to make the areas more adaptable.