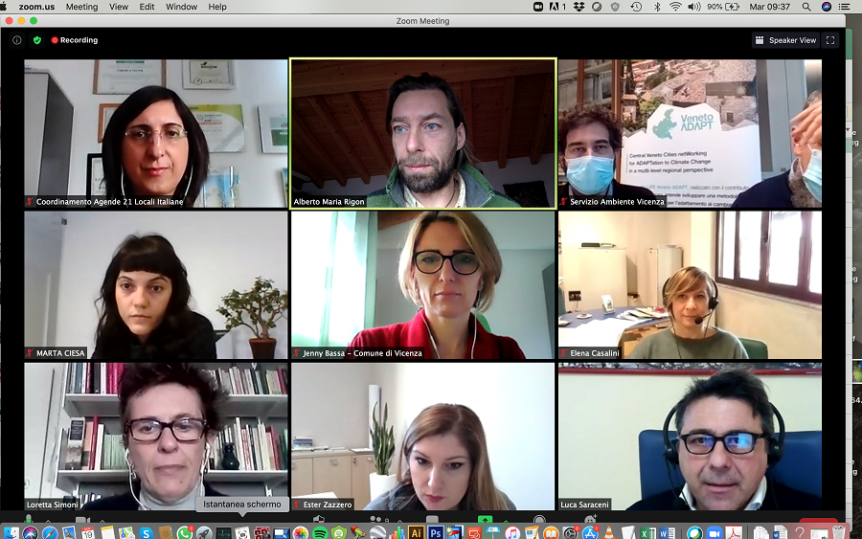 A dozen, among the representatives of the two cities, the participants in today’s event (January 19): for the municipality of Vicenza, in addition to the project manager Fabio Cestonaro and the consultants for Veneto ADAPT Alberto Maria Rigon and Marta Ciesa, also colleagues from the Environment, Energy and Territory sector Mrs Donata Fiorentin and Mr Andrea Timillero, and Mrs Jenny Bassa and Mrs Loretta Simoni from the Community Policies Office; for the Municipality of Pescara were present the manager of the European Projects sector Mr Luca Saraceni and his colleagues Mrs Ester Zazzero, responsible of the Protection and Enhancement of the Sea and River service and Mrs Elena Casalini, head of the Attraction and Development Policies Service. Valeria Baruzzi participated on behalf of Coordination of Italian Local Agenda 21.

During the event, in addition to the presentation of Veneto Adapt project as a whole, the twinning process and the initiatives that the city of Vicenza is implementing within the European project were presented. The meeting was also an opportunity to start, between the two cities, a path of mutual knowledge and exchange of experiences on the issues of adaptation to climate change at urban level. Both Vicenza and Pescara are implementing their own SECAP (adaptation plan) defining a vision and a strategy to adapt to climate change. Furthermore, both cities have already found themselves facing risks associated with floods, urban flooding and heat islands. The cities shared some projects in progress and specific interventions of hydraulic requalification of rivers and urban regeneration to make cities adaptive.