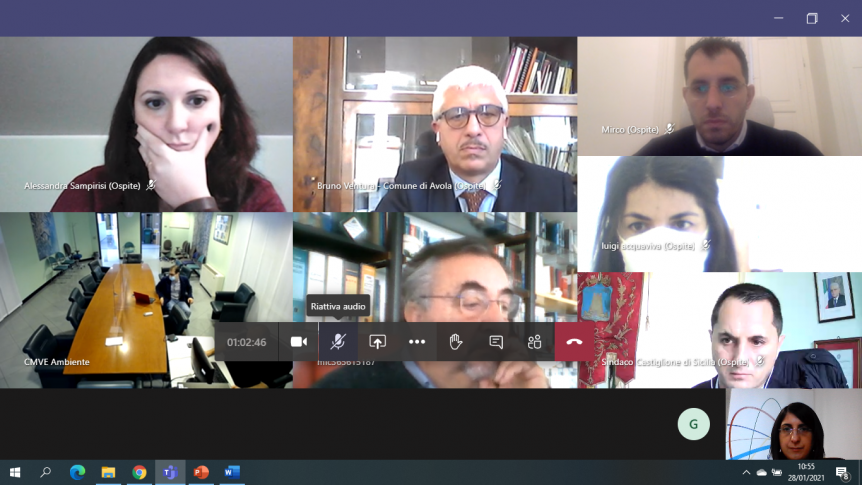 On Thursday 28th of January the first twinning meeting was held between Venice, partner of the LIFE Veneto ADAPT project, and the Comune di Avola (Siracusa), Comune di Castiglione di Sicilia (Catania) and the Ufficio Comune per la Sostenibilità Ambientale (UCSA) dei Comuni di Palma Campania, San Gennaro Vesuviano, San Giuseppe Vesuviano and Striano, who have all responded to the “Call for Twinning”.

Taking part in the meeting and representing Venice were: the Project Manager and Head of the Environment and Civil Protection Sector Massimo Gattolin and representative of the Environment Department Davide Lionello who outlined the initiatives that have been put in place for the adaptation and supporting of the 44 Councils in the Venetian area as part of the Veneto ADAPT project.

With them there was also the advisor Alessandra Sampirisi who coordinated the writing of the PAESC and the Energy Manager Mirco Alvano. Representing the UCSA, its management Luigi Acquaviva and Michela Aufiero were in attendance.

The Sicilian Councils and those of the Vesuvian area, for their part, outlined what they have planned and already done within their own localities to manage the impacts of climate change and to adapt to the changing climate. The meeting was, naturally, a chance to start the journey of exchanging knowledge and awareness on the more general aspects of the adaptation of localities and their resilience. Among the more discussed topics, some were found to be of common interest and will definitely be delved into again in the coming meetings, like: the planning, programming and managing of adaptation measures on an administrative level, analysing climate vulnerabilities in the areas, how they are organised in the Sistema Informativo Territoriale (Territorial Information System), as well as the adaptation measures on an urban and residential regulation level to counteract heat waves.