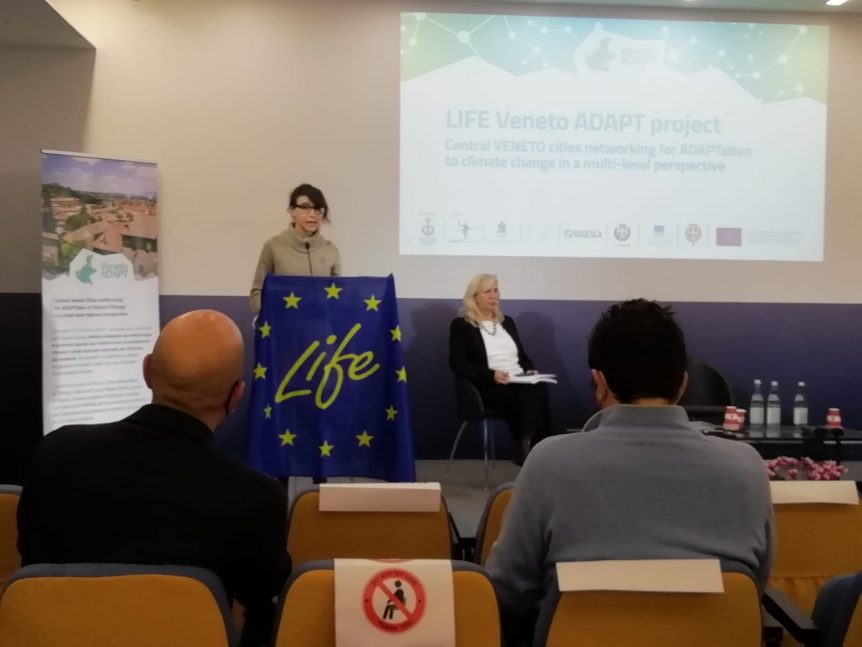 The increase in average temperatures (+0.6 °C in the last decade), in the frequency of extreme phenomena (such as floods, hail, sea storms, intense wind) and in heat waves with consequent periods of drought, are some of the effects caused by climate change in the Central Veneto region in recent years, which are severely testing the resilience of cities. This damage is also becoming increasingly significant in terms of economic impact.

Starting from the analysis of the vulnerability of the Central Veneto involved territory, with Life Veneto Adapt project, possible adaptation actions were identified and a structured monitoring system was defined. The project has lasted four years and has seen the cities of Padua (project coordinator), Vicenza, Treviso, the metropolitan area of Venice and the Union of Municipalities of the Middle Brenta (Cadoneghe, Curtarolo, Vigodarzere) working in synergy with the technical support of Coordinamento Agende 21 Locali Italiane, IUAV University of Venice and Sogesca srl and the collaboration of Arpav Veneto.  The area has a population of approximately 3.5 million inhabitants, i.e. 72% of the entire region. It is an emblematic territory for the variety of its composition, from the Alps to the sea, passing through hill systems and large plains, with large productive cities and small historical villages.

Now the “Veneto Adapt method” and the concrete tools to optimise and make more effective the territories’ ability to respond to extreme phenomena, have been transcribed into replicable guidelines, which the partners presented, together with the overall results of the project, in Padua on 2nd December 2021 during the final conference “Climate change: how to deal with it? The tools developed by the Veneto Adapt project”. During the meeting it was also announced that the guidelines will now be officially handed over to the Veneto Region and made available to all public administrations, so that the methodology conceived by the project can become a model to be applied for the development of adaptation paths in Italy, as well as in Europe. Twenty-five cities have already signed a letter of intent to commit themselves to follow the guidelines of Veneto Adapt, six of which are European.

The first and crucial step foreseen by the project is the transition of administrations from the SEAP to the SECAP, in order words, from the planning of Sustainable Energy Action Plans to the implementation of Sustainable Energy and Climate Action Plans, as envisaged by the Covenant of Mayors. Thanks to Veneto Adapt, 32 new SECAPs have been drafted and approved to date in our region, for a total of about 750 actions aiming at mitigating and combating the effects of climate change through direct intervention to solve the main vulnerabilities that have emerged. On the one hand, the reduction of CO2 emissions, with a forecast 45% reduction by 2030, through the choice of non-polluting energy sources and energy saved by improving efficiency in construction and production and, on the other hand, all those actions that aim to increase the safety of the territories (recovery and repair of embankments and ditches, hydraulic and irrigation works, …).