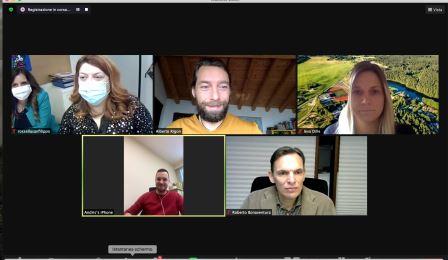 Today’s meetings (23 February) between Treviso and Smiltene (Latvia) concludes the first round of twinnings between the cities that are partnered with LIFE Veneto ADAPT and the Italian and European cities selected for the “Call for Twinning” promoted by the project.

Representing the Comune di Treviso at the video call, were representatives of the Environment Department Rossella San Filippo, Anna Maran and Roberto Bonaventura, head of SUAP and Urbanistica; for Smiltene, Ieva Dille of the Planning and Development Department and Andris Jaunpetrovic, the Council’s Energy Manager.

Like the other twinning meetings, after the first part was dedicated to the initiatives created by the Veneto ADAPT partners as part of the project and to the objectives of the twinning process, the cities discussed topics relating to urban adaptation and resilience in general.

Treviso has illustrated the city’s hydraulic problems and has outlined the guidelines that are being made regarding the reopening and the redevelopment of the channels and of the hydraulic network; the explanation was then made for the transition from the Mitigation Plan (SEAP) to the Mitigation and Adaptation Plan (SECAP).

Among the various actions reported by Smiltene regarding the energy efficiency of buildings and of the SECAP, Treviso was particularly taken with the measures put in place by the Latvian city to prevent the eutrophication of lakes in the area (problems directly linked to climate change) and the creation of a “data management platform” that monitors the energy consumption of the public buildings in real time.

The measures to prevent the risk of flooding, the improvement of the quality of the surface runoff water, data collection and indexes/monitoring systems for the SECAP, were the topics of most interest to both parties which will be covered in the next meetings.